Don't count your chickens before they hatch

DAYDREAMING : READ THIS AND WONDER how we got thus far...and in Cornwall

800,000 potential voters...couldn't register on their household iphones. Democracy at work.


BURN THE WITCH : WATCH THIS IF YOU ENJOY BRITISH SATIRE (Trumpland)

700,000 expats not allowed to vote. (Ironically you lose your vote if you leave Britain...democracy at work)

Don't panic Mr Mannering!
Callous humour would have been the same if we'd remained : Laughing in the aisle by John Oliver
'Allo! 'Allo! govt now about to repeal the 1972 treaty of Accession - next Denmark and Italy. I bet just as were about to finish negotiating our way through the EU in seven years time the EU won't actually exist in it's current format...it'll reform to survive without us. At least we have the 2017 Presidency of the EU Council to look forward to. (July-December...maybe Estonia will have a go)

Under new management : pdf now downloadable for all the brit boys and girls  cer.org.uk
The Seven alternatives...to EU membership. Take your pick Boris. Woe betide your new mandate. You is out laddie and Europe is looking to it's future not ours?! Unbelievable. You still have EU migration (free movement of people) as part of any trade deal & you still have to pay into an EU budget and abide by EU rules/laws. And you'll have no say in the matter ?!!! Misinformed, misled & missed opportunities. Someone should be held to account for this...

Airfix : buy buy. All euro finance centers do not move from London to the Continent true or false?
We are now re-building Spitfires but like the Red Arrows no one is allowed to fly on health and safety grounds.

CFP (Common fisheries policy) or WTO. Can a fish out of water negotiate better ?
We didn't bother listening to the experts but we'll soon be paying high commissions to experts telling us what the best non-negotiable negotiations to trade will be like.

Back in control with a tiny 4% margin of a majority...and taxes will not go up
VAT will go now to zero on all electric and gas bills. It can now go lower than the 15% the EU zone were going to re-negotiate on. Wow all our senior citizens winter fuel payments will be sooooo low this coming winter and is uncertainty good for pensions?

We have drawn a line in the sand - only the tide keeps coming in and washing it away. I blame King Canute
Goodbye Scotland...Northern Ireland...Gibraltar...sod it lets sell off the Falklands too. Something the new Prime Minister can look forward to. What a legacy. Not the United Kingdom. Where's the greatness in that?

Diffendoofer day!
1,000,000 immigrants will arrive back in England. Yep you guessed it - British nationals who moved to Spain. You is no different.

Strange little Island of mixed up people
FCUK UP : Only us Brits can vote in Tory's that first wrecked our manufacturing base and let down the working classes, with a Labour Europhile PM that took us into illegal wars and an arrogant Tory Prime Minister gambling on breaking up unions just to appease his party. Well done...us. We've divided ourselves and the world in one fell swoop. Back to the Future with this one.

Centre for learning : And I've even been to the Bullingdon club..I mean bar. thebullingdon.co.uk
The Erasmus programme is null and void?! Less you know the better. That's because we just screwed the future education of our youth..?! You now can't live and work anywhere in the EU and get NHS paid treatment across borders or even retire in Spain with full benefits.

Ageist : over 65's were more likely to vote leave true or false?
If you were under 45 and voted in because you thought about the future...in 20 years you probably will not want to sell your parents cheap housing to pay for their expensive care. You'll be the ones paying for this OUT debacle. Bank it. Give them an OD. It's gonna be payback time. I'm going on a cruise.

When all people have lived with too much deceit - the working protest vote will endeth the future of representative democracy and kick out the jams
Fiscal studies : The facts that were hidden cos I wasn't reading the smallprint
Do you think George Osborne's £9billion pound a month borrowing spree stops...instantly. He now uses £350million a week to pay for our deficit. Sod the NHS...it'll go back into an EU budget as part of our use of the single market so said the leavers. Oddly ironic.

We don't want to understand what immigration and free movement is.
Free movement of a Labour force ends. That is what the Brexit peeps wanted isn't it? And forget all those 'benefit' reforms Cameron fought to get earlier in the year. You think the EU will endorse those on their Labour force?

Political narcissism : Yep the proportional representation of countries under the Lisbon treaty were never quite progressive enough for Cameron.
Trump in Scotland : In a country who voted to stay in the EU ? Scotland has a right to a second independence referendum

Cornwall & the new spaceport (not subsidised by the EU)
Net beneficiary to EU subsidies votes out. Dairy farmers go to the wall. The conservatives loathe farm subsidies. Still at least I can chuck a line out and catch haddock now. We have experts on hand to tell us where the fish swim. And I only buy arctic white fish anyway.

Cloud cuckoo land : The Gold Standard
Austerity stops now. Way before Article 50 is invoked because the Leavers need weeks, months, no years of re-negotiations of regulations. Adding to more bureaucracy ?

The EUMAN cost : Federalism or bust. Well now were out Germany can push for it.
It was like Germany v England (well a divided British nation) We may have lost on penalties or was it an own goal? Anyway, we want a replay, with new rules! We will now get the help of the USA to be the new oversee chairman. To win people over to TTIP and they've now got us by the balls. Without any EU regulatory safeguards.

No fees no commission
Fanciful. We can now create our own trading zone and include other euro sceptic countries. A new Europe under British leadership?! It's Tony Benn's idea that Labour hasn't used yet. We'll be arrogant to think it'll all unfold and topple like dominoes...cos Junker is real PO at the moment. Boris will have to work his charm with his tail between his legs, whilst Putin can't stop laughing.

The National pysche : orange is the new black - it's exactly like the Hueys
Brexit biscuits wearing their black thursday jumpers. Because we like to think we are superior to most people and we like to tell other people what to do. (A bit like the EU) We will now have a referendum on getting rid of an undemocratic and unelected House of Lords?! haha lol

Zippy or Bungle? Shame and shambles all rolled into one...day.
We all knew Boris was a Europhile really. That's why he looked so glum..I mean happy at the press conference?! Good luck invoking - delaying Article 50. Next in line to fall on his Toledo sword. No need for businesses to plummet into a self inflicted double dip recession. But lets not talk the economy down...we wouldn't want to do anything reckless. Unlike the political parties.

Marriage..has to be said like Jack Sparrow in Pirates of the Caribbean
Darn couldn't we have just got a Marriage Guidance Councilor in and sort out this notion before we jumped ship? Lets hope the divorce is amicable and conciliatory for all our sakes. But you know who gets custody the kids? I want the power tools and the vinyl player. We are split down the middle - who wants what who shares whom? Do we want a new relationship..? Someone has to make that change. And have lots of kids that are up for equality, peace, justice, the common good and are able to love mankind.

A few pics from the ongoing 'Imagine Falmouth' exhibition includes my St. Mawes boats painting. The next door gallery rooms are dedicated to Wreck & Ruin (On show also prints of Hogarth's The Rake's Progress) 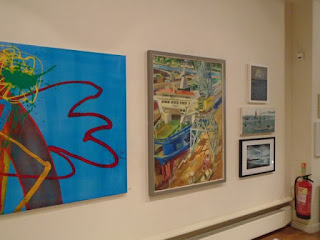 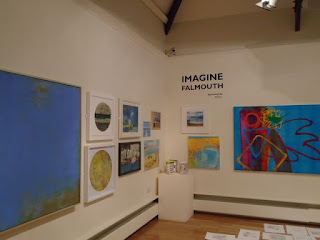 None of this is true : Nihilism's net worth is a Nobel peace prize
Conceded points taken on who to trust - by Joe Friday 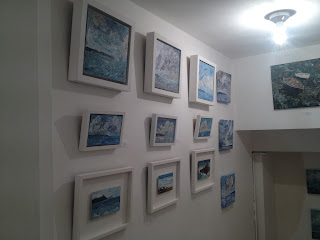 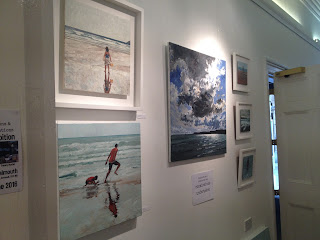 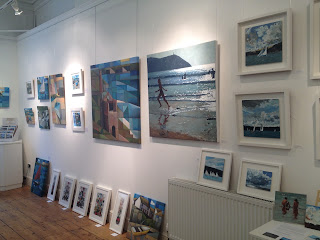 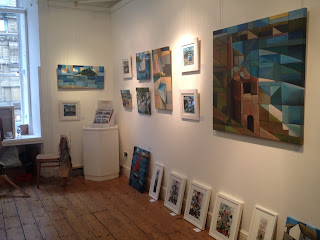 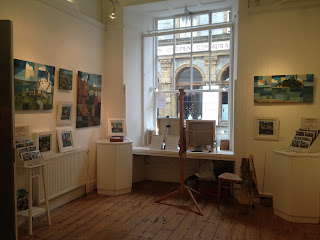 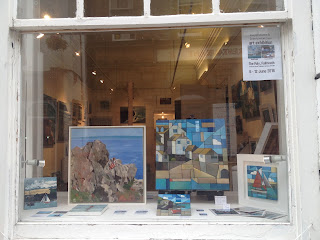 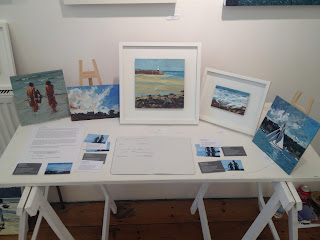 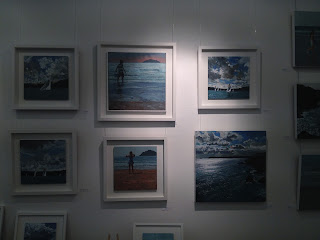 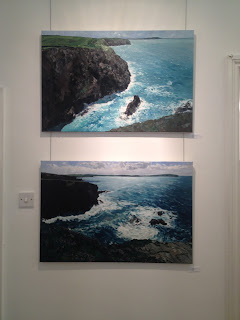 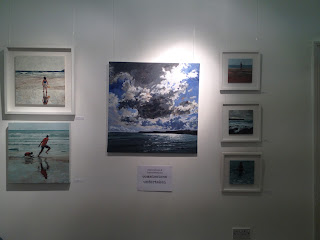