Everything is F**ked exhibition


cmrprojectspace : Everything is F**ked
Posted by Studio 7 at 14:00 No comments:

The Presidential Administration on a slippery slope of hidden truths...or everything is f**ked


NBC...DO YOU WANT TO SEE A PRESIDENT disagree with the press ?!


Look west to the red town. Two lads screamed from the carriages 'freedom'. I tried to yell but I had lost my voice. Blindly stepping past the youth who pissed his pants, dejectedly mumbling falsehoods incoherently and yet for all time the evening was still young. Bright neon lights lit up the doorway "Everything is f**ked"..I read to an applause of a consensus. Parting the black entrance curtains strange roots unfurled before me lifting me up two flights of stairs - it must be the air I thought. I hadn't even begun drinking.
Who in arts name gave a Wonderwall of truth? Deplorable hung around his neck and there it stays a rich man's noose. Playing the old game..the out of date symbol has left the supermarket and found it's way into the White House. And in the corner plays a dance of the fool making a f**king mockery of dead cardboard and bin liners. Packaged trash. A brilliant throw away.
The pendulum swings make Redruth Great again, Make America Good Again. Wear the hat. Keep it under your hat. Defend the four freedoms or kiss my arse...goodbye. Take a keepsake and pin it on your bathroom wall. Always aim high. Seeking refuge crossing the Med, a lifeboat of freedom awaits. Trust me I'm a scientist.
In rooms of doubt the canvas plays, the stickers read, the printers talk. There's no end in sight. Who voted for a straight banana? Don't they share 50% of our genes? Or is this just a recycled fact. Curves are not acceptable...by any standard of the imagination. If you want it - to hell with it. Face facts and don't pretend to assume anything. Not if you want to live. As the printers block the Map. Oh, and turn your world upside down...Jim'll Fix It for you. The start of a falsity axed after a year by the BBC. So long as the keys to Broadmoor are there to lock him up. While you all chose to stay in the Common Market. That's Life so said the Ascent of Man.
Who's Tower is it anyway? Held in a Blind Trust on the 26th floor. No friend of Art Deco goddesses that's for sure. Richard Prince is right. We were all chuffed we knew about that years ago mate. It's in Gremlins two. Anyway fcuk the week take a blue pill - unlike Neo who chose the Red Pill. You take the blue pill the story ends - you wake up in your bed and you believe whatever you want to believe. On a weekly basis for the dysfunctional and impotent man. Two's gone missing. And it wasn't a Wednesday night. Where was that low hanging fruit lying too now?
Crushed under a grape, the chicken and the egg the career opportunities crushed. The play on words where the UV light highlighted F***** Island in all it's bombed out glory. Where Dinosaurs live, tanks do battle upon the Raven heath.
Thankfully I wore the T-Shirt to the happening. The Goddess/Empresses new clothes slowly moved carefully out into the night air ...she bathed in the red waters, rose from the earth as the sweetness poured down over her paper mask. Nothing is so black and white as this. Then she dressed and the room copied her.
I left soon after for one last look. Losing the night but not the day. Three girls of a youthful age ran passed and darted behind a wall. Squatting, one let out a free speech and they laughed out loud. Alas, no time was left, I always run out of Spacial Lacuna.
Out of breath, I must lose more than a few pounds to gain an artists weight. Missing the BMX bandits who assumed the drinks were free and not only for the privileged few. The girl on the train enthused about the upcoming special and couldn't believe a friend queried why Alan Rickman wouldn't be appearing? The internet holds a wealth of knowledge I assume. No-one claims to be ignorant. Sometimes the only answer is Love Actually.

Curated by Stuart Blackmore - day before the show

Everything is F**ked poster 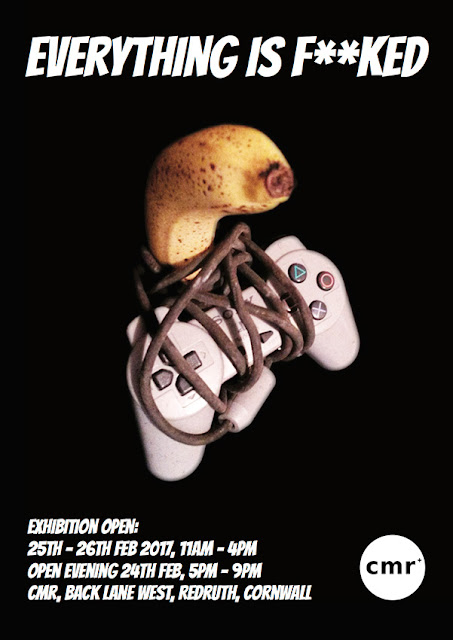 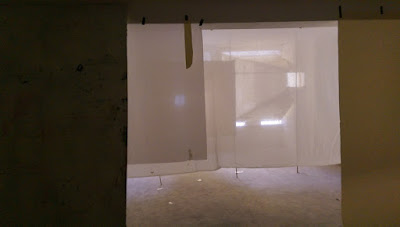 Space: is the boundless three-dimensional extent in which objects and events have relative position and direction.

Lacuna: The spatial relationship between objects.

Proxemics: The study of how humans use space and the effects that population density has on behaviour, communication and social interaction.
Over the two months of our residency, we intend to work collaboratively with each other and the space at Back Lane West; making new work that is both site-specific and haptic. Our perceptual and sculptural reality is based around the habitation of this space.

The Rise of the First Order

If rain is God's work - is anyone receiving any climate change visions?

Blame the organisers who filled one of the spaces with two...three large marquees in the foreground. You could have seen the empty space better...what do I know I wasn't there I watched it on TV.

Spice up your life

Sign an executive order
got a mind to make

This is my edict
this is my dictat